As well as collaborating with many talented artists over the years, we have partnered with  individuals and companies to co-produce various projects – such as Gonzalo Varela from Magic Lantern Studio (The Man Who Cannot Sleep 2018, Bug Lab puppets 2017, Life is a Carousel 2017, Otto Learns to Fly 2014, Pearly Whites 2017 and various roving gigs), Lee Ramsayer-Bache from Little Projector Company (Trail of Lights 2019), Jasmine Powell from silent revolution (Look a Book! 2019), Tim Ratcliffe from Fenestra Productions (Wealth of Nations 2009) and Colleen Burke (flight 2009). 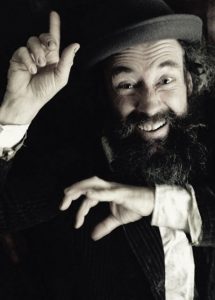 “I’ve been collaborating with Sanctum Theatre for many years, playing a host of characters, including Otto the intrepid bear in children’s puppet theatre show, Otto learns to Fly, the incorrigible Nanny and the flamboyant Tree of Life in Life is a Carousel.“

Chapple creates artistic projects which incorporate installations, theatre, storytelling and puppetry for festivals and schools. He is committed to connecting with people of all abilities and age groups, producing live experiences that entertain, inspire, challenge and amaze.

Born and raised in the inglorious outer suburbs of Melbourne, Australia, Julian creates works across various disciplines to distill life’s bounty into intimate, censorial and surreal art experiences. He has studied Zoology, Geography and Animation. 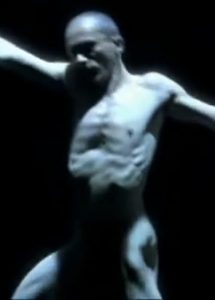 Stéphane is a multi disciplinary French/Australian performing artist based in Melbourne
Australia. 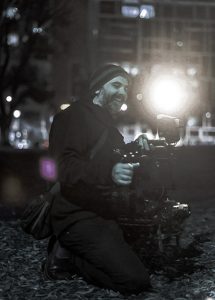 As co-director of Little Projector Company, Ivan has been creating and facilitating the development and exhibition of site-responsive installations, performances, and tours that combine projection art, storytelling, cinema, sound design, puppetry, dance, sculpture and more. In 2019, Little Projector Company collaborated with Sanctum Theatre to deliver the community-led Trail of Lights Festival and created a feature-length projection work for the Sunshine Silos Projection Festival, celebrating the Sunshines art, rich industrial history and cultural diversity. 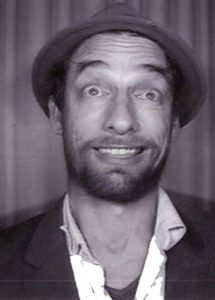 In 2018 Lachlan launched Sanctum Studio with his wife, Jasmine Powell.

Lachlan has also worked for the Snuff Puppets (snuffpuppets.com) since 2008, an irreverent and scatological giant puppet company, performing in their shows and directing their People Puppet Projects in Australia, Denmark, Sweden, South Korea, Thailand, Brazil and Chile.

Lachlan won the 2012 Impress Prize for The Lost Journals of Pedro Piscator and other Tales, an eclectic illustrated collection of tall tales published by Impress Books. He has also taken part in several solo and group exhibitions, as well as creating street art, public art and community art for business, government and community-based clients. The most notable of these being Life on Planet Daisyworld (2015), a 30 x 10m street art mural in Fitzroy.

Lachlan studied puppetry and theatre making at the Victorian College of the Arts. 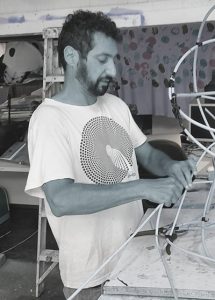 Daniele has been an integral collaborator on Woodford Folk Festival’s and its Fire Event for the past 5 years with his giant creations Viktor, Astrid and Naut and The Elders Festival. He is artist associate of Adelaide based company, Open Space and has had continuing involvement with the Village Festival as artist as well as management since its inception. He has led the creative team to build the animated floats that feature in the The Falls Festival’s annual Fiesta Parade in Lorne (2007-12).

Engaged as a designer he has collaborated with a vast array of theatre and music companies including Polyglot Theatre, Papermoon (Indonesia), Galerie Knap (Netherlands), Regurgitator, AAO, The Town Bikes, Aphid, Somebody’s Daughter, Tuida (S Korea), and Point of View (Macau), Puppet and Its Double (Taiwan).

Jasmine has worked with Sanctum Theatre since 2006 including as publicist for lament: candles & compost (2006); as curator of silent revolution: an exhibition (2007); as performer in bower: family portraitas part of the Zero Projects 2009 season; and as mask and puppet co-facilitator at Moomba Festival in 2015. She works as stage manager and puppet minder for Sanctum Theatre and Magic Lantern Studio puppet shows and roving puppets at festivals around Victoria.

Jasmine completed her Bachelor of Creative Arts at The University of Melbourne/Victorian College of the Arts in 2003 where she met Lachlan Plain, artistic director of Sanctum Theatre. Jasmine was assistant producer for Melbourne Fringe Festival’s Furniture and Inventions programs in 2004, and co-ordinated the Kew Community Festival in 2006 and 2007.

Jasmine completed her Masters of Social Work at RMIT in 2013 and did her final Social Work Placement at Borderlands Cooperative. She was published in New Community Quarterly for her article on her community practice in her Local Energy Transfer System (LETS). Jasmine worked in the mental health sector for many years before taking time off to be a mum. She now works on cultural community development programs through her business silent revolution as well as Sanctum Theatre. 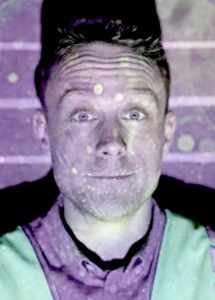 Lee Ramseyer-Bache is a projection artist and filmmaker. He loves to share and celebrate stories. Lee passionately believes in the power of storytelling to foster solidarity amongst humanity. Lee is Co-founder of Little Projector Company (Projector Bike). He has led their innovations in mobile projection and site-responsive storytelling, through immersive walking tours and public art performances. He is also co-founded film production company Lightworks Studios.

Lee is interested in technological mediation of the living world, the inertia of industrial action in our technological epoch, and site responsive performances that challenge the conventional roles of performer and spectator. 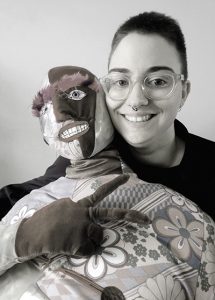 El Schmiedte is an artist, designer and maker based in Melbourne, Australia. They have an experience in a wide array of mediums, including costume design for dance and musical theatre, costume making, puppetry, creature creation, and fine art. They have spent much of 2019 working for the Tony Award-winning Creature Technology Company, and recently held their first solo fine art exhibition, Fuck This, which explored questions of identity and mental illness through mixed media, sculpture and collage. During 2018 they interned with Sanctum Theatre and Magic Lantern Studio, helping to build and manage their show The Man Who Could Not Sleep for White Night in both Melbourne and Ballarat. 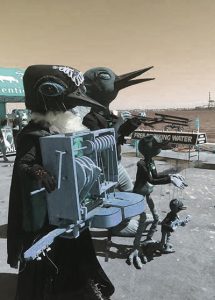 Nick Wilson is a Melbourne-based giant puppet designer-builder, performer and arts facilitator. His work combines theatre, spectacle, music, narrative and engineering into lively and audacious comments on myth, history, community and the natural world. He is drawn to work that is engaging, fearless and fun – intent on strong images, big themes, high energy, and massive impact.

As a core member of Snuff Puppets since 2006, he has developed and toured both mainstage and roaming works, as well as leading People’s Puppet Projects, throughout Asia, Australia, Europe and South America. He’s been with The Village Festival for 13 years as parade artist, crew member, workshop leader and performer. In recent years he has also worked with Creature Technology Company as a sculptural fabricator and with A Blanck Canvas as both Performer and Puppet Builder.

He has collaborated with Sanctum Theatre / Magic Lantern in the production and performance of Bug Lab for the Melbourne Museum and Moomba Parade, and as a builder on The Man Who Cannot Sleep for White Night 2018.